The History of the Kenton Hotel

The Kenton Hotel was built in 1909

The Kenton Hotel was built in 1909 by the Swift Meat Packing Co, as the landmark of their company town “Kenton”. It was there the cattle buyers from the Midwest would meet with ranchers from eastern Oregon to buy and sell cattle. 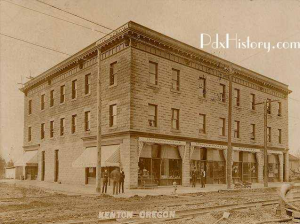 Kenton Hotel became well known for the speak easy and underground boxing that were located in the basement of the building, and the numerous tunnels connecting visitors to the “underground world” of Kenton. It was in the late 1800’s and early 1900’s that a young boxer named “Mysterious” Billy Smith became known for his bare knuckle boxing. These fights took place in the basement, and it is said that many a prominent figure was ringside to see the action. The building has been seen on the History Channel, as there are frequent reports of possible ghost sitings.

Throughout the 1970’s and 80’s, the building slowly deteriorated. A demolition order was issued in 1990, but the building was saved from the wrecking ball by a couple of people with great aspirations for the aging property. A three year renovation rejuvenated the building bringing it back to its glory. 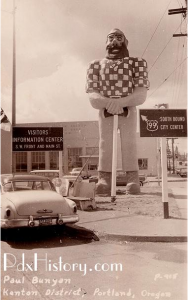 Kenton Station Restaurant HistoryThat is how the Kenton Station Restaurant and Pub came to be in business. A family owned restaurant, it is not uncommon to find one of the owners as your server or bartender. Come enjoy a free game of pool, or one of our large screen TV’s to watch your favorite team. We offer a wide variety of food options, as well as a full bar and children’s menu.

Come in and check out the amazing history of the area, and who knows, maybe you will see one of the past occupants for yourself.